It's called the Ritz for a reason. 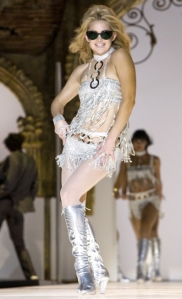 I have a feeling Kate Hudson is about to blow everyone away in her upcoming film, Nine. We’ve all watched her acting career blossom, but she’s about to add singing and dancing to her resume.  Check out the trailer for the movie along with the first song release, Cinema Italiano by Kate Hudson.  The song is already available on Amazon’s mp3 downloads.

Costume designer Colleen Atwood took on the intimidating task of creating the many costumes for the production.  Pictured here is Kate Hudson’s Swarovski crystal mesh dress for the Cinema Italiano number.

The musical, directed by the Oscar nominated Rob Marshall (Chicago) is scheduled to be released Christmas Day.  Kate holds her own with a star studded cast, including Daniel Day-Lewis, Nicole Kidman, Marion Cotillard, Penelope Cruz, Judi Dench, Fergie, and Sophia Loren.  The story follows a famous film director (Day-Lewis) as he interacts with the many women in his life.  This film promises elaborate scenery, multiple costume changes, and sweeping musical numbers that will not disappoint.